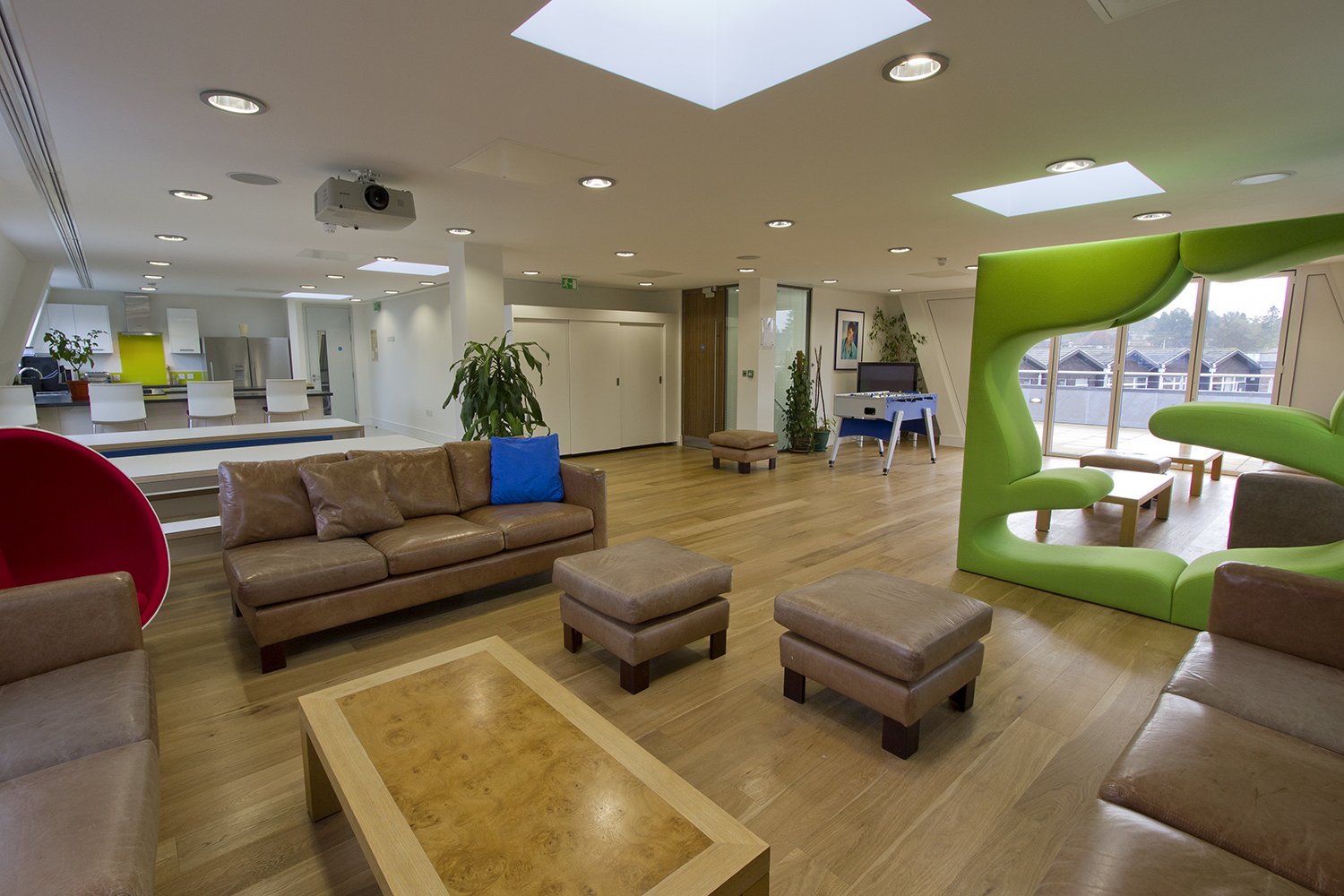 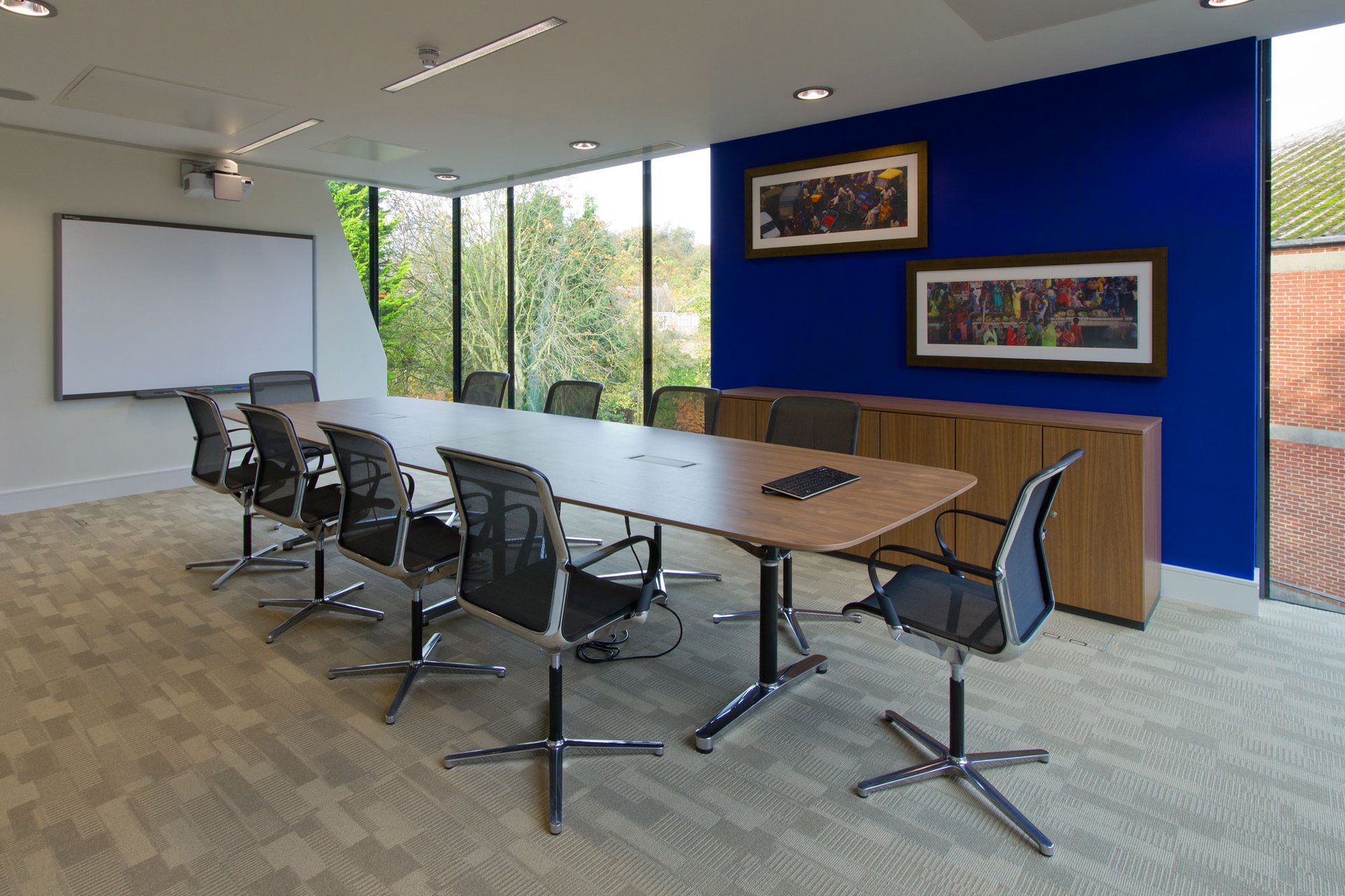 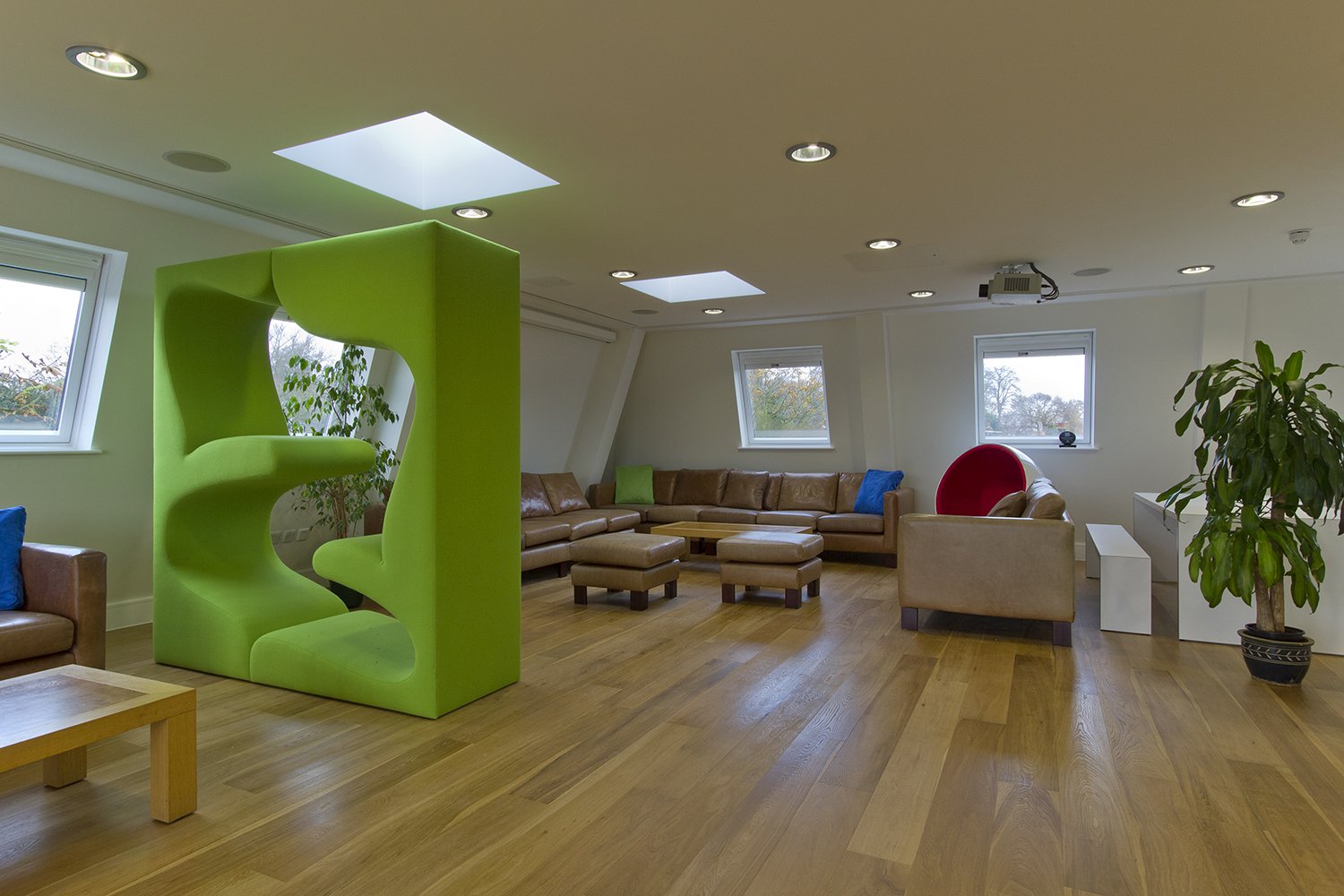 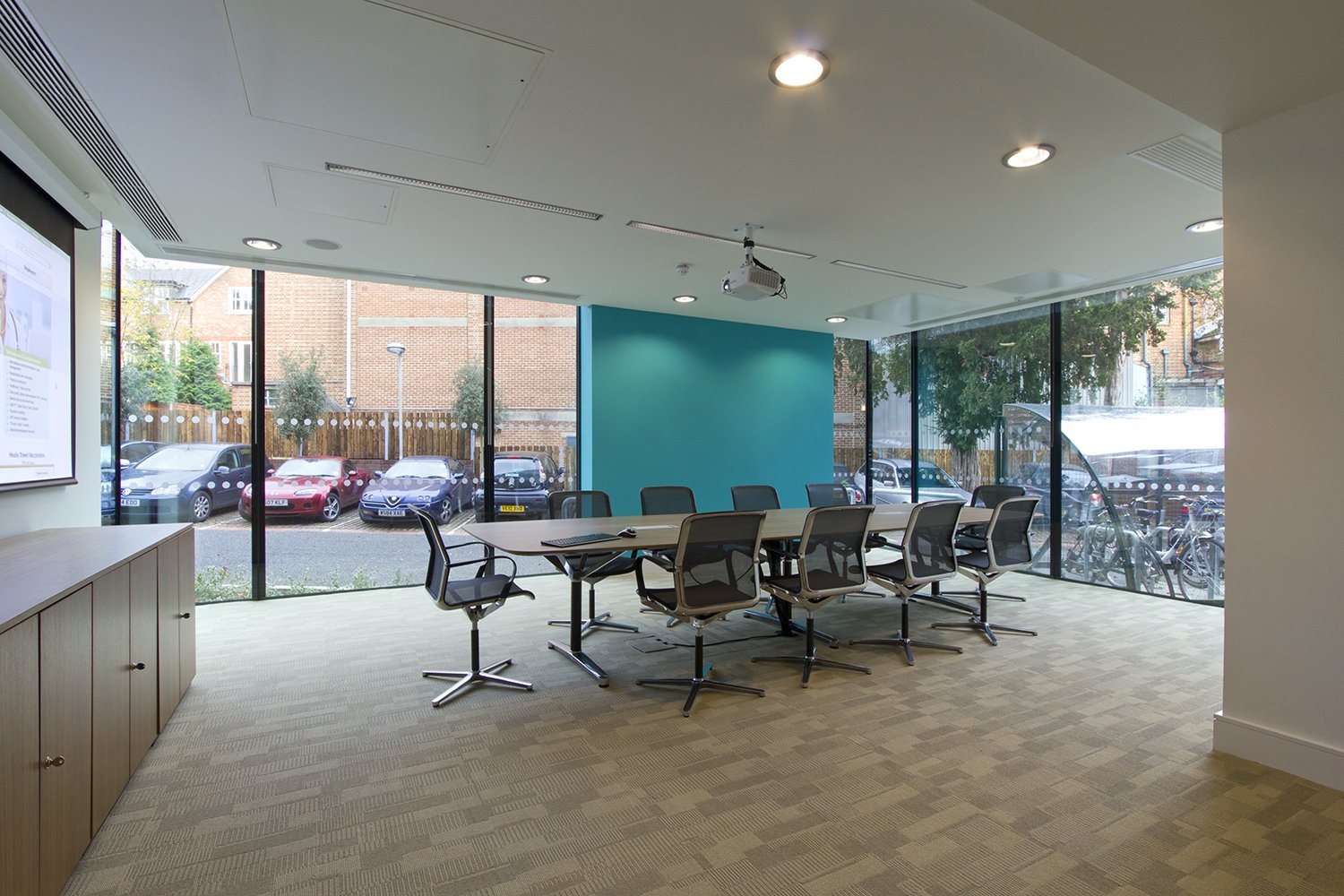 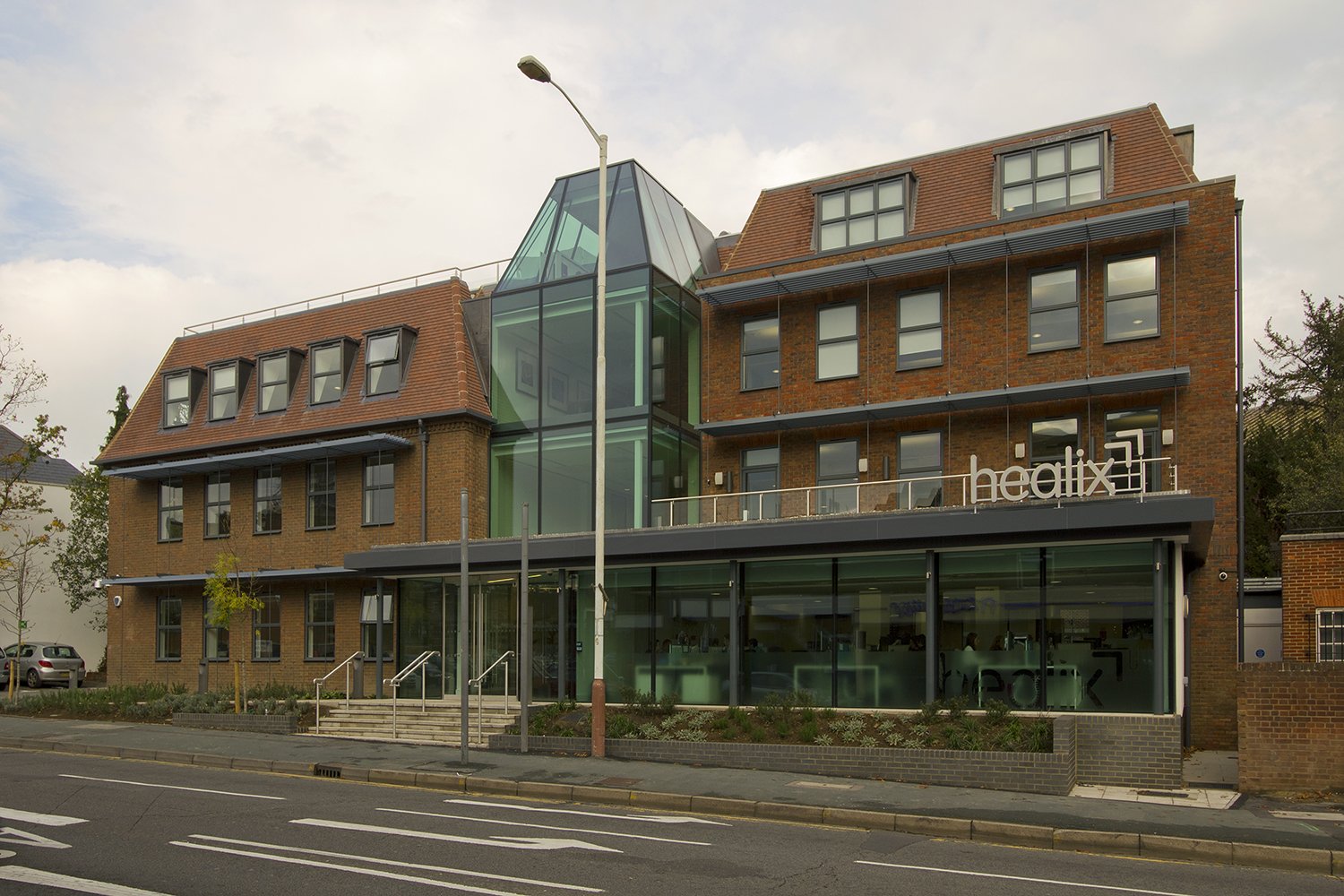 The Healix Group of Companies provides healthcare and risk management solutions to clients around the world, and has done since 1992. The group offers bespoke services to clients wanting control over their health, travel and risk provision. In 2011 the group moved their headquarters to Healix House, Esher, an expansive and sustainably-built four-story office building on a brownfield site, beautifully designed for them by Clive Chapman Architects.

From the very early planning stages of this project, Healix’s IT department and other key decision-makers within Healix agreed that the quality and suitability of the audio visual systems were of prime importance. Having selected Crossover to get to grips with their requirements and then design and specify these systems for their new Esher headquarters, it soon became clear that perhaps above all were two elements:

Some elements of the brief were seemingly simple but the Healix team were clear that their chosen AV contractor must fully understand their needs and design an audiovisual-enabled workplace that is innovative, simple to use, cost-effective and that would be tailored perfectly to their needs.

The core requirements were audio visual facilities for five meetings rooms, and a high-spec staff breakout area that would serve as a place for informal gatherings as well as an entertainment room and open-plan kitchen space for staff throughout the work day. This breakout area was flanked by a an outdoor terrace, for which they wanted weather-proof audio systems, as well as similar spec for a similar outdoor area on another level of the building. Strict aesthetic standards were also in place. For instance installed projection screens were strictly to be ceiling-recessed and as invisible as possible; the same was requested for loudspeakers and any other audio visual equipment that doesn’t absolutely need to be in eyesight.

With multiple rooms in heavy use, Healix were also interested in room booking systems, to manage and organize room scheduling and to help them reduce confusion in this regard.

Furthermore, as a forward-thinking company whose interest in sustainability and environmental aspects was made clear to Crossover, Healix were also highly receptive to any suggestions from Crossover’s design team (who, unlike most AV installation companies, work very closely with our sales team) had to reduce the power consumption and environmental impact of the AV installation, as well as to prolong its lifetime.

Having seen some of Crossover’s previous installations, including those with interactive whiteboards and displays, as well as AV control systems, it became clear to the team at Healix that Crossover could be trusted for a meticulous system design process, and they were impressed by the quality of our AV installation services. Healix confidently chose Crossover to deliver their AV systems at their new offices. 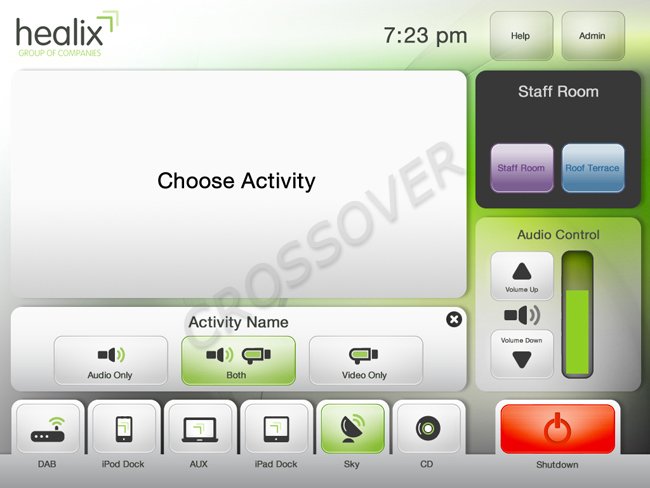 The IT Director and Facilities Management team at Healix were keen on one idea which Crossover suggested which was to enable the audiovisual equipment to be monitored and to a certain extent operated throughout the entire building from a single location, so that, for example, the office Facilities Manager could tell if a certain projector’s lamp is running close to the time when it will need to be replaced, or if a certain meeting room accidentally had its AV equipment left on late in the evening. Because the AV systems were spread over four floors, it was clear that creating a centralised AV system where all components would ‘report’ back to a central location was far less agile and cost-effective. A solution was therefore designed so that, with the help of AMX control system technology and iPads, each meeting room and the staff’s breakout area functioned as their own independent units but ‘reported’ AV-relevant information to one another automatically.

Room booking systems were installed for four heavily-used key spaces. A clear display of room booking information is displayed on the touch-sensitive screen outside each of these rooms, from which the end user can obtain an overview of meetings, make their own bookings and cancellations, and easily extend a meeting that is in progress.

Green or red background LED illumination is visible from a distance to show whether the meeting room is free or occupied. Basic information is automatically displayed on the screen, including start and end times, the remaining duration of the meeting, and who has booked the room.

The touch-sensitive screens outside of the meeting rooms allow you to: 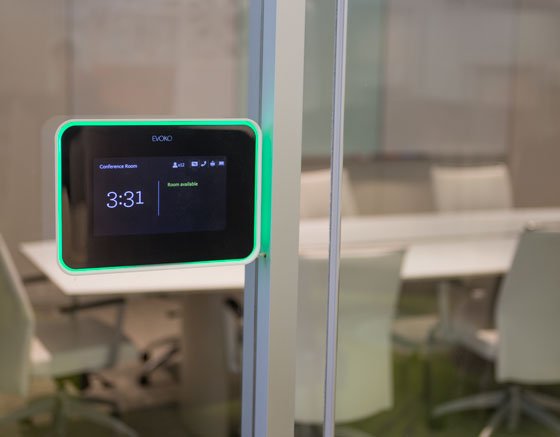 The 3rd-floor staff breakout area benefited from a ceiling-mounted projector, an in-ceiling loudspeaker system and an AV control system that the users controlled via an iPad – essentially an iPad which runs an ‘app’ that gives the user a very simple user interface to control the AV system. This ‘app’ from AMX, who are a leading manufacturer of audio visual control systems, is essentially a blank canvas onto which the AV integrator can "paint" their own bespoke-designed interface that constitutes the front-end of the system, which in turn combines with scrupulously bespoke-programmed AMX hardware that serves as the back-end. Crossover employ some of the best AMX and audio visual control system programmers and designers in the UK, and as a result the audiovisual environment in Healix is easy and intuitive for even the least technically-savvy users. In this case, the iPad allows the user to:

This meant the staff benefited from a comprehensive entertainment system, which also included a CD/MP3 player, Internet radio and film and TV playback capabilities via an integrated Blu-Ray/DVD player and a Freesat TV system. In order for staff to be able to play presentations and movies from their own computers additional auxiliary HDMI and VGA inputs were installed in the rack and in strategic points throughout the space. Outdoor all-weather loudspeakers were fitted in the two terraces, with the audio of both of these controllable via the iPad in the Breakout area. For the building’s meeting rooms, Crossover designed and specified an audio system based on Emphasys ‘bezel-less’ in-ceiling loudspeakers, and once again Crossover installed and bespoke-programmed an AV control system using iPads, making the systems very easy and intuitive for all the staff. Two of the five meeting rooms utilised a standard projector and ceiling-recessed projection screen as their main meeting room display, while another two meeting rooms were equipped with interactive SMART Boards.

Using the functionality of the interactive whiteboard, the user is able to:

The final of the five meeting rooms was installed with an LED-backlit 65” flatscreen display. In each of these five AV-enabled meeting rooms Crossover integrated an infra-red motion detectors which, combined with our bespoke programming, ensured that if the rooms weren’t used for a period of time, the entire AV system would be shut down automatically, preventing financially and environmentally costly consumption of both electricity and projector lamp hours.

Read more about our work in Offices and Boardrooms

You guys have been really good thank you we are delighted still that we chose you for the AV supplier.

J. Kennet, Director of IT at Healix 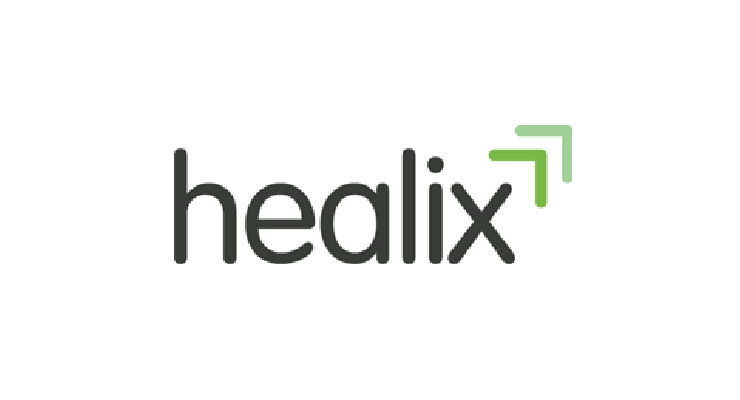