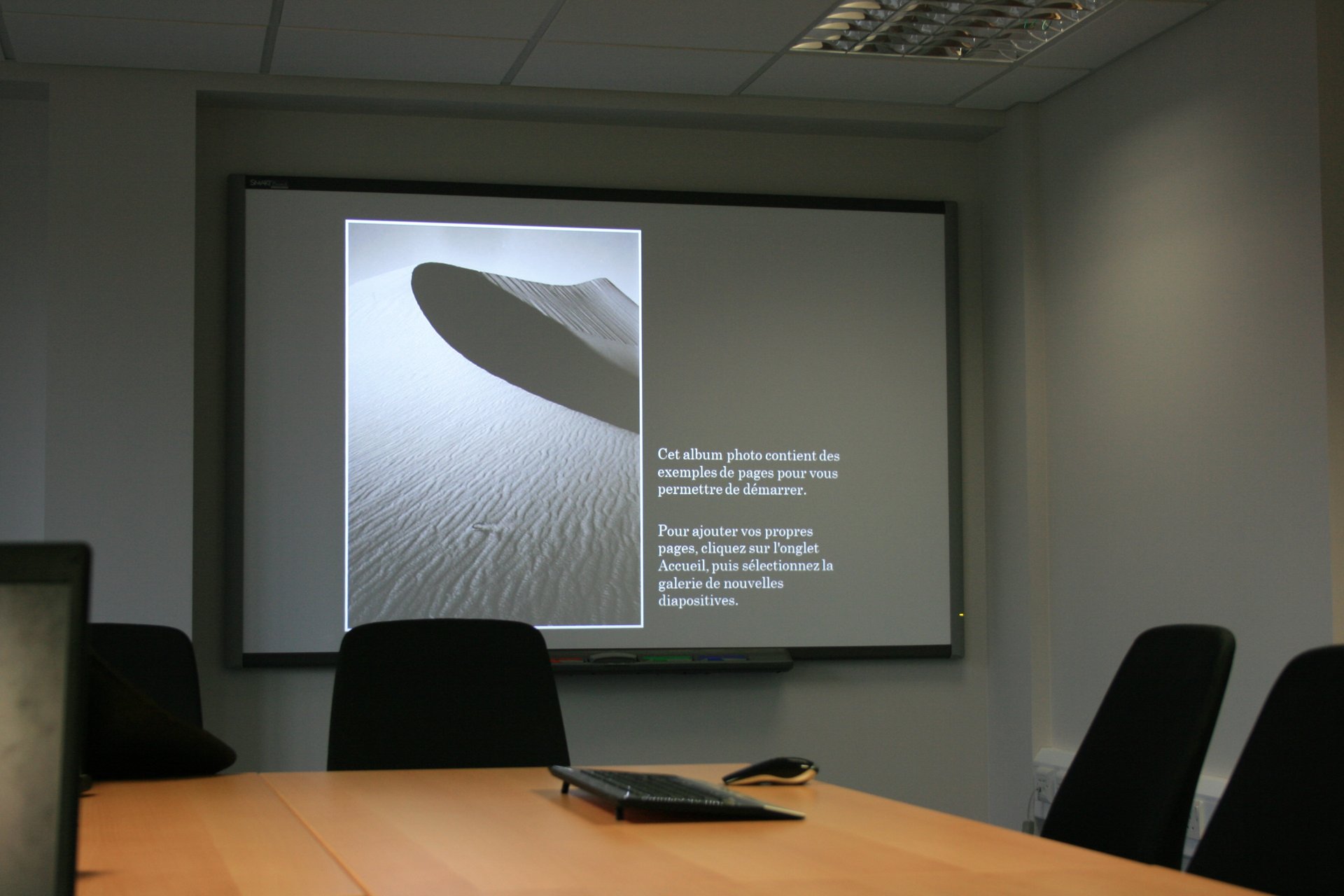 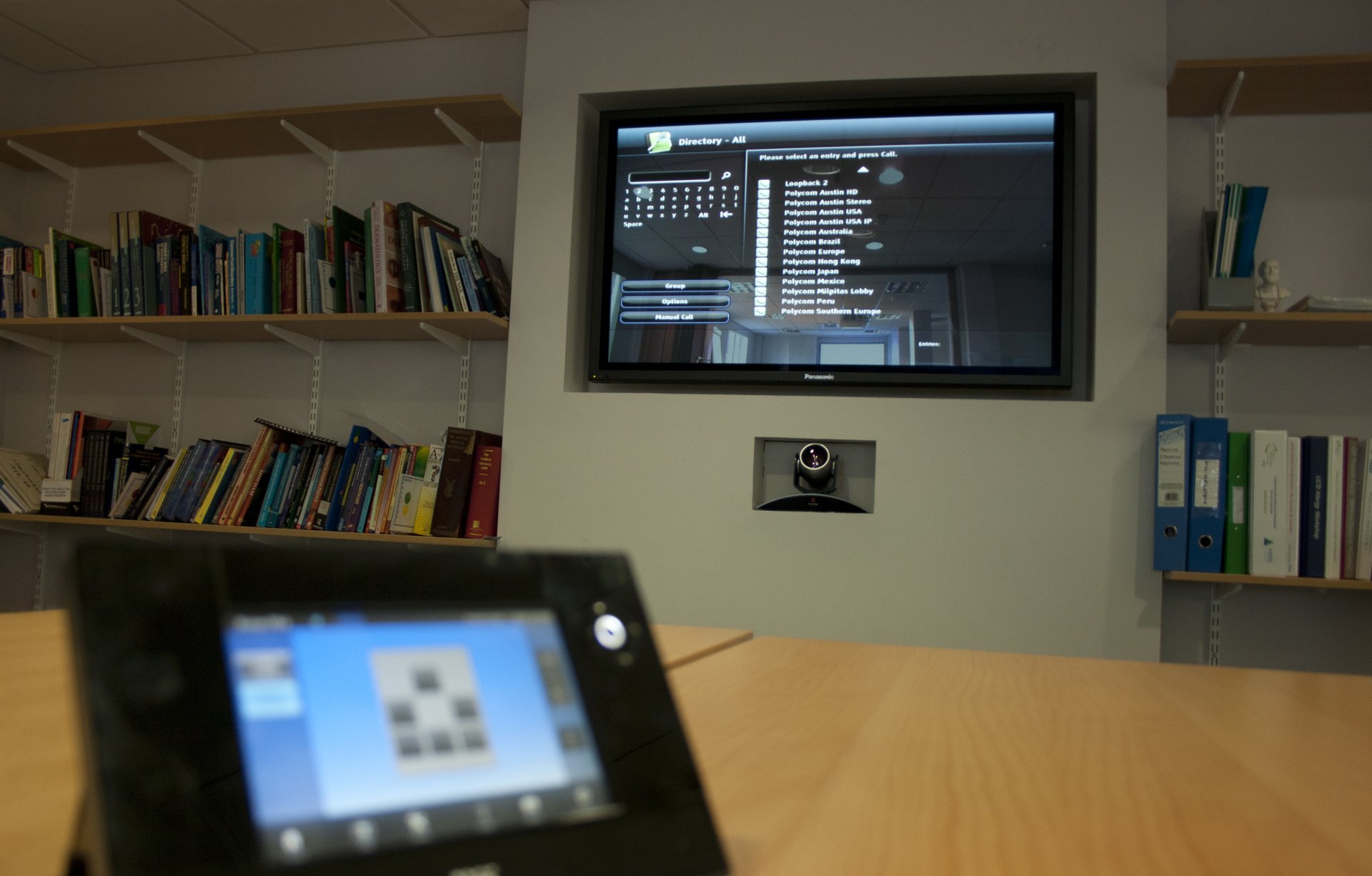 As part of a move to a new-build premises, the management of Cricket Green Medical Practice seized the opportunity to ensure that their entire three-floor premises was equipped with cutting-edge audiovisual systems. Crossover was chosen to design these systems and then co-ordinate with both the building's architects and the main contractor Uprise to install and commission the AV systems.

The main concentration of the audiovisual equipment was in two large rooms designed for collaboration, meeting & training. Crucially, these two rooms were to have a folding (retractable) soundproofed partition installed between them, enabling them to function both individually and as one larger room. Crossover worked closely with the staff and management of the Practice to establish their needs and then record their brief which made clear that the audiovisual systems should include the following features:

The Crossover team also suggested a number of useful additions to the original audiovisual brief, including a document camera that would take advantage of the display facilities in the training rooms and that would help presenters and videoconferencing participants incorporate printed and/or handwritten documents in their presentations.

The SMART 685 projector-based interactive whiteboard model was installed due to its large 87" diagonal image size and 16:10 wide-screen aspect ratio. In order to ensure that the image quality would not suffer as a result of the high ambient lighting in these rooms and the large image size required, the design team specified the NEC NP4100W - a WXGA-resolution projector with 5,500 ANSI lumens brightness as the ideal counterpart to the SMART board.

The other training room was slightly smaller and it was decided that a large-format plasma or LCD display would achieve better results when combined with the videoconferencing system which we intended to install in this room. A Panasonic 50" High Definition plasma display was installed due to it having the best combination of size, quality and value for this job, and it was recess mounted sufficiently high so that the videoconferencing camera could be recessed below it and still achieve optimal eye-contact simulation during video conferencing sessions.

A Polycom HDX High Definition videoconferencing system was installed along with an HDX ceiling-mounted microphone. The system provides stereo audio pickup and reproduction and was supplied with a 'People + Content' package to allow presentation video & audio to be transmitted to remote sites via the Polycom system alongside the video and audio feed from the camera and the microphone array.

Crossover designed a system which - between the two rooms - incorporated eight video and audio sources: four laptop (or document camera) flush-mounted wall input plates (two in each room); two local PCs (one in each room), a Denon professional rack-mounted DVD player, and the videoconferencing system (which was in reality two outputs because of the 'People + Content' feature).

Crossover's design team wanted to ensure that in every scenario, any AV source in either of the rooms could be routed wherever it was needed (e.g. if the partition was open and a laptop was connected in one room, it must be able to be displayed on the projector in the other room). For that purpose, a Kramer 8x8 VGA+Audio matrix switcher was selected to centralise and route all of the audiovisual signals in the training rooms.

It was clear from the outset that the client did not wish to compromise in their ambitions to achieve a high-end audiovisual system that would create an exciting and pleasurable working environment. In light of this, Crossover suggested the inclusion of automatic blinds and dimmable lighting functionality to the audiovisual design, with control of both of these features being fully integrated with the AMX control system in the training rooms.

Along with the two training rooms, five other rooms throughout the building were designated by the client as required "zones" for audio distribution, making a total of seven audio zones. A BSS Soundweb Lite Digital Signal Processing (DSP) unit was installed in order to process and route all of the audio in the building, ensuring the best audio quality and protecting the loudspeakers and amplifiers. Most importantly, the integration of this unit meant that any audio source could be selected and played back at different volumes within any of the seven zones in which the audio system was installed.

In-ceiling loudspeakers were then installed throughout these zones, with Crossover ensuring that the number and location of loudspeakers in each zone provided good coverage; in the training rooms a higher quality "pivotable" model was used so that, even from the ceiling, the speakers could be aimed towards the listeners.

The three different centralised audio sources included a Denon 5-disc CD changer and were located in two different areas, but all three were linked to the Soundweb and distributed throughout the building.

In our search for the ideal control system for this project, we prioritised the four characteristics most important to us in any system - easy to use, customisable, reliable, and well-designed. The AMX MVP 5.2" gloss black wireless touch panels were clearly top of the range in the latter three categories, leaving us with the quality of our programming to determine how easy and enjoyable the system would be to use.

One of these full-colour touch panels was installed in both of the training rooms, each with bespoke, unique programming that allowed the user to control of all the audiovisual, lighting and window-treatments in the room, but also with both being able to control the equipment in the other room whenever the two rooms were intended to be used as one.

In order to make this as intuitive, simple and quick for the user as possible, we liaised with the partition manufacturer to collect the data we needed to devise a way to integrate a microswitch into the folding partition, thus allowing the system to automatically detect whether the partition is open or closed (and thus whether the two rooms are joined or being used separately). This in turn enables the AV control system to 'behave' accordingly, for example enabling the use of all 4 laptop input plates for presentation on the projector whenever the partition was opened, whereas when it was closed, only the two input plates in the room would be shown as selectable options.

Additionally, we installed five AMX keypads in the other rooms to which audio was being distributed, and the system was programmed so that both these and the training rooms' AMX touch panels were able to control the Soundweb to change the audio source and volume in the areas where they are located, as well as being able to control the Denon CD changer.

Throughout every step of the way, we ensured that our programmers made the system as simple, intuitive and straightforward as possible, and, of course, that every single function was working exactly as it should be. We find that the meticulous attention to detail that this requires (and the painstaking hours of testing after the main part of the installation is over) always pays off. Please ask us if you'd like to speak to our clients to find out whether they agree.

It really was a great moment when a few of the NHS staff from the Practice brought their children into the training rooms, so excited were they about their new workplace. Seeing two generations marvelling at the technologies, and navigating them easily was the icing on the cake.